Note: The screen-shots of video clips that comprise the bulk of this post are of a video that lasted only 45 seconds which I included near the end of this post because it was so full of uncomfortable glances and reactions (rather revealing micro-expressions), it was necessary to screen-shot several moments.

You stood by me despite credible allegations and didn’t burst out in laughter when I made wild claims that could be easily disproved.

I probably didn’t need to lead you with a clenched fist, but no matter how tired and unenthusiastic you were, you followed me every inch of the way.

You were unfazed as I lost my temper, ranting about the Clintons and conspiracy theories when others were horrified.

Even my supporters grimaced when I yelled, but you showed how well-trained you are. Other dogs would bark or cower in fear, but you sat dutifully by my side. 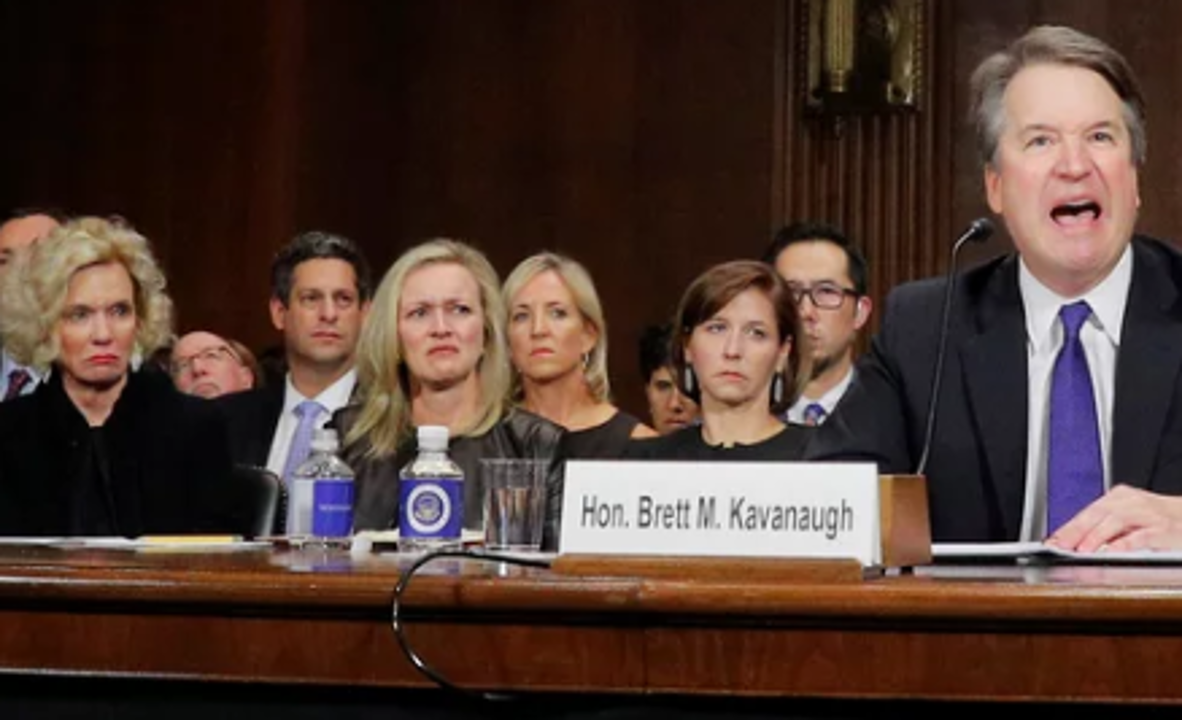 Even Zina, my law clerk, was so surprised and distracted by my outburst she forgot to make those childish hand signs she did in previous hearings for some darned reason.

But not you. You’re good and loyal. You know how to interpret my every movement and inflection. You didn’t wince when I gave your shoulder the Vulcan Death Grip. I didn’t intend it to hurt, but I know it does every time I do it. 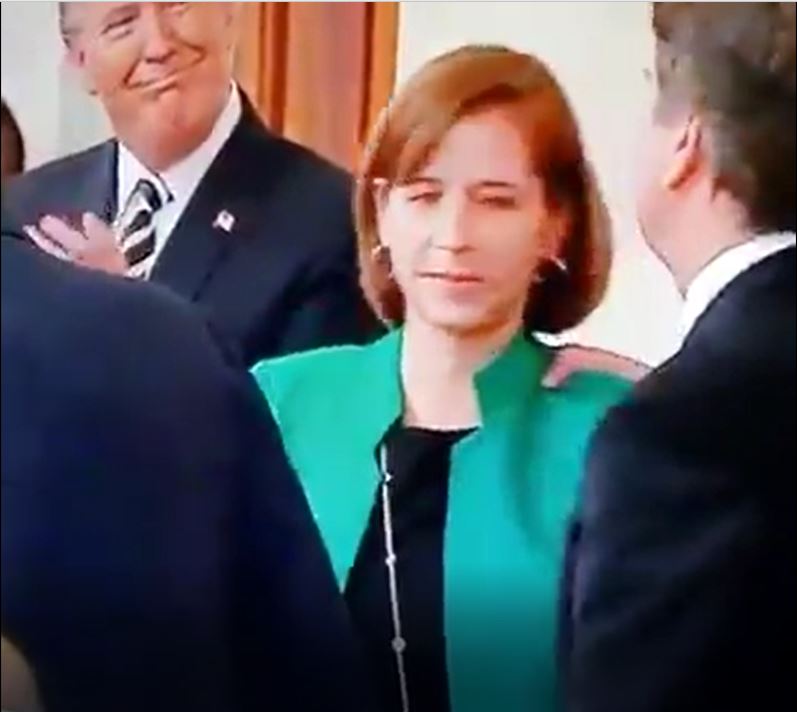 Then I couldn’t make up my mind where I wanted you to stand and I led you away and moved you around again—and you didn’t complain.

You smiled proudly and looked down at our daughter to reassure her that you’ll be OK tonight. 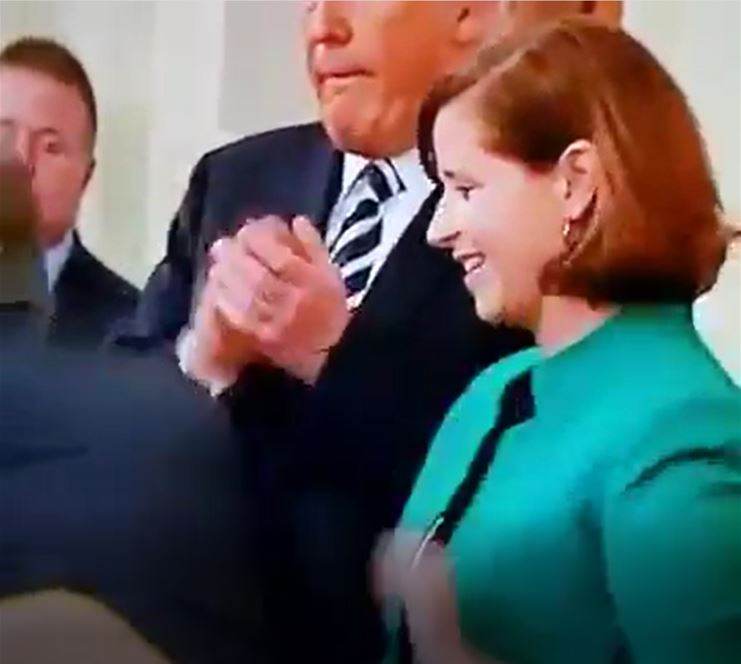 Even if you’re not too sure. 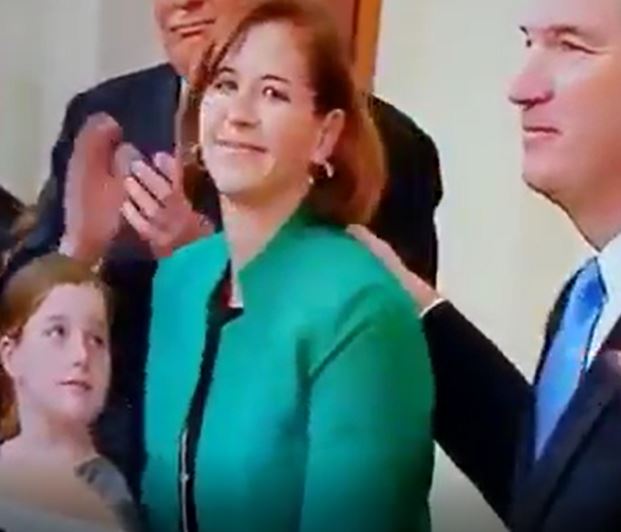 You smiled for the cameras as best you could even though the spot I keep slapping might be bruised. 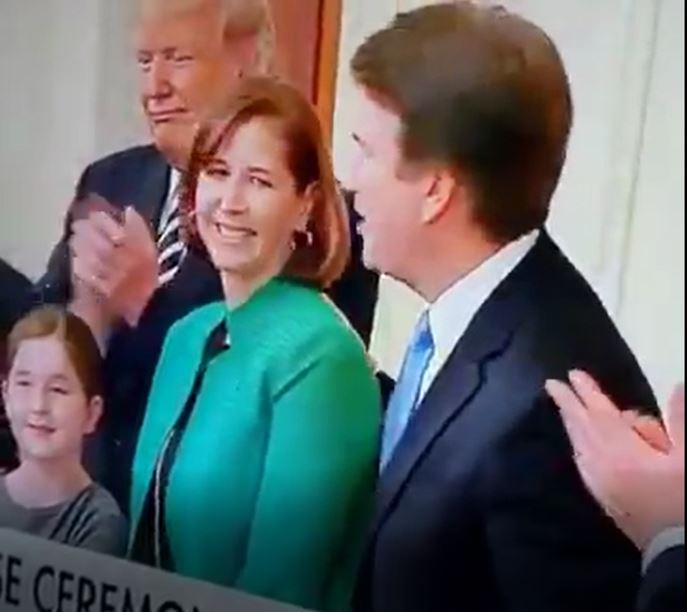 And kept checking in with me… 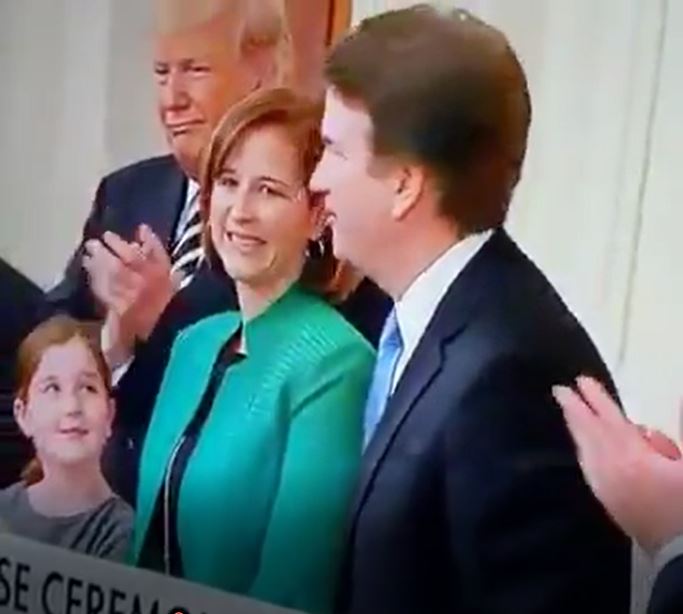 But you didn’t make a fuss.

So I gave you a really hard smack to keep you from looking pathetic, and you handled it pretty well. 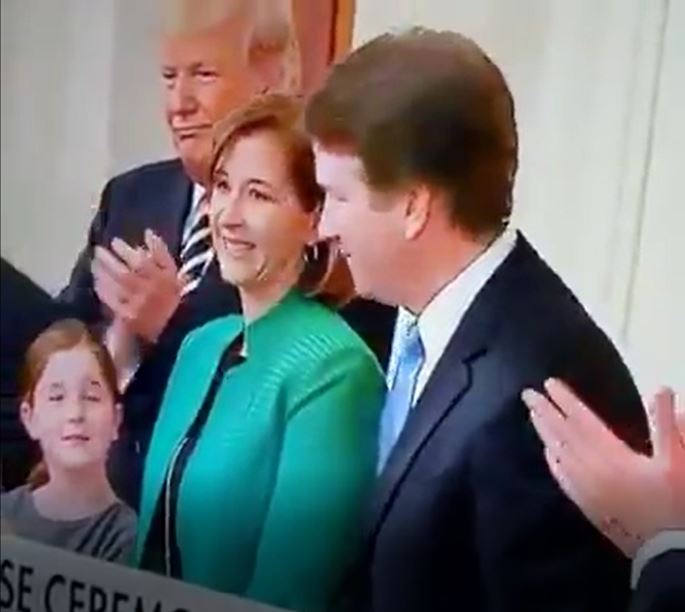 You’ve raised our little pups well. The youngest one is even more concerned for your well-being than you are for yourself. 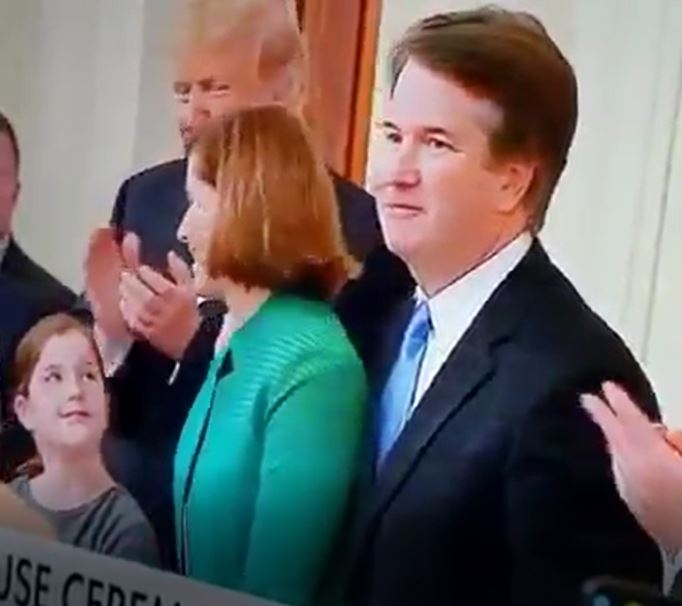 She even reassures you. 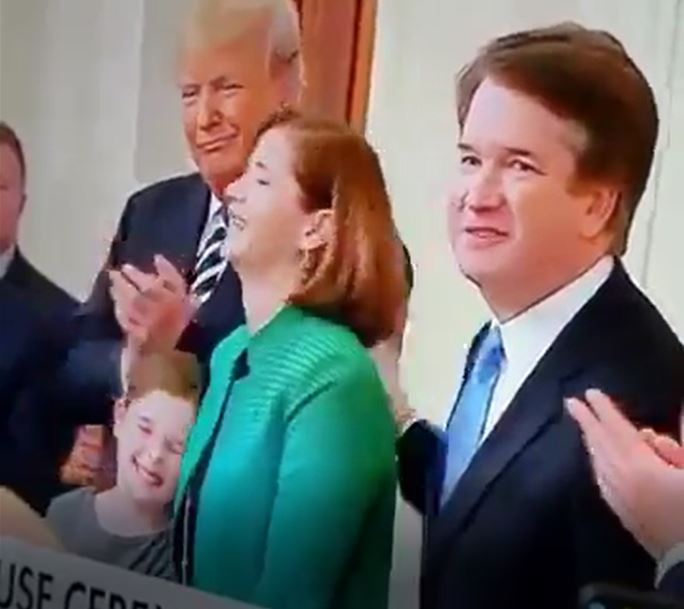 You have done a fine job raising her and she’ll be a good helpmeet to another powerful man. 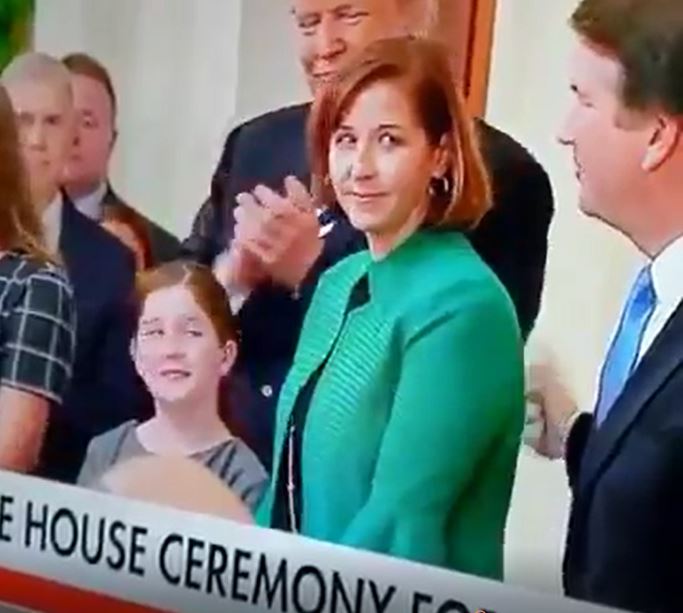 Checking in with me again… 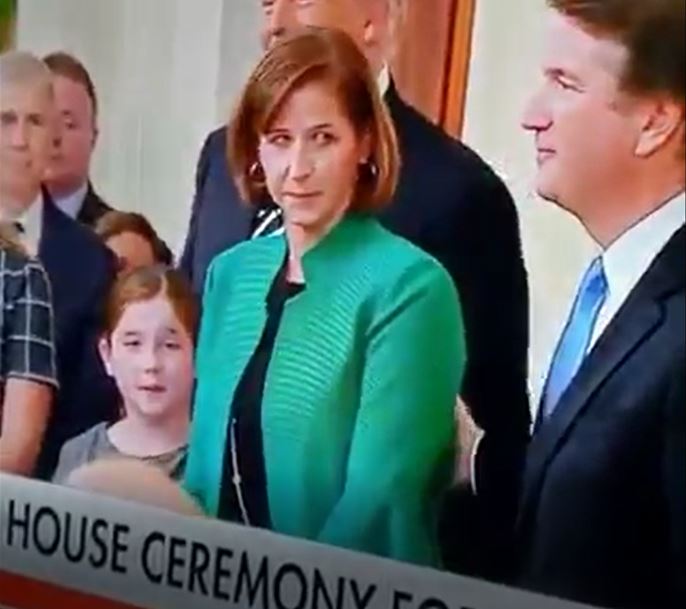 And made sure our eldest daughter doesn’t worry. 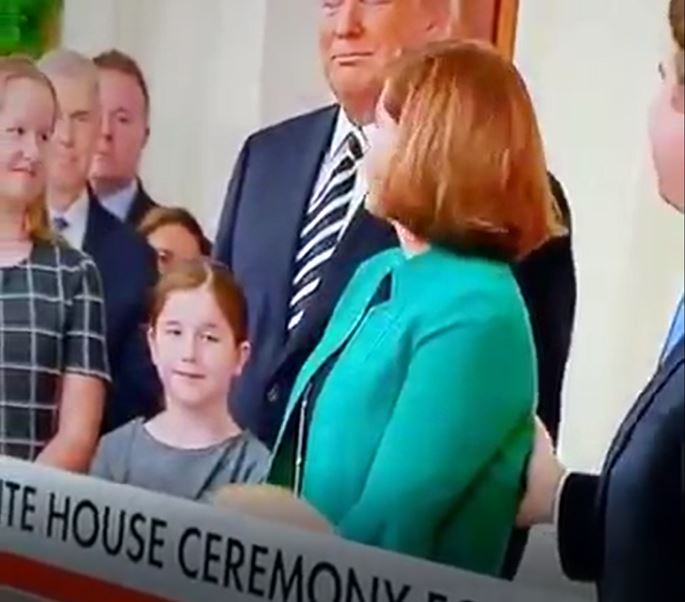 You might be in trouble for this one. You let the mask slip. 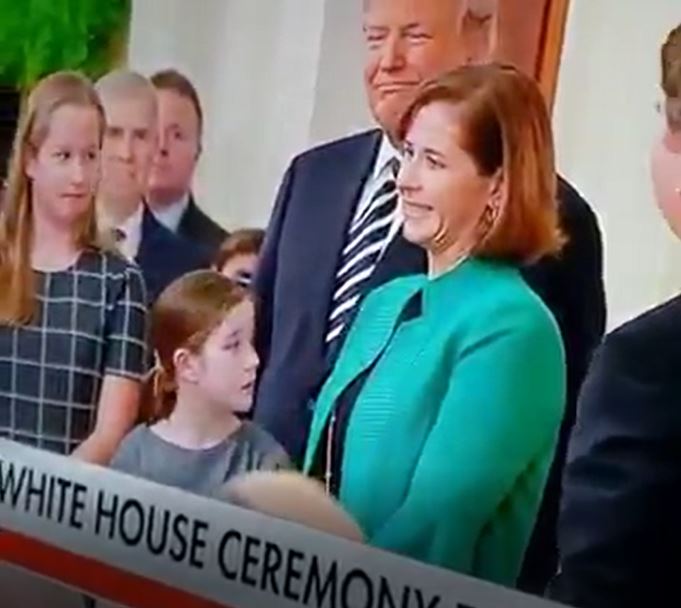 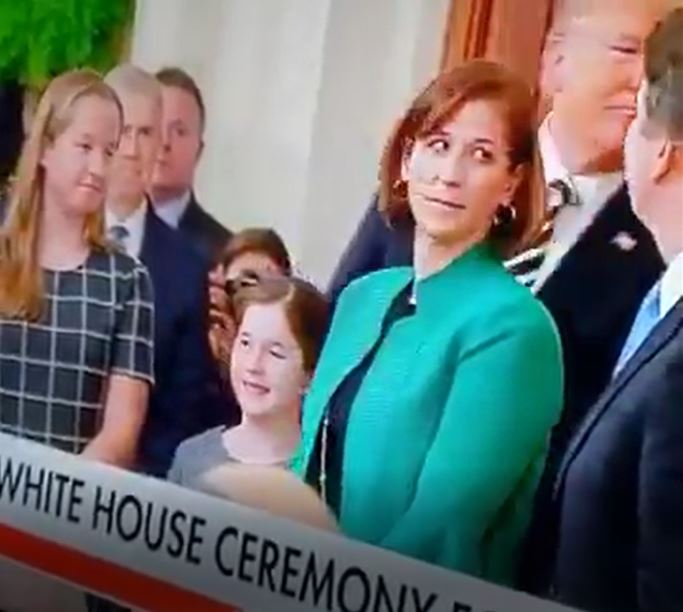 We’d better wrap this up before you embarrass me. 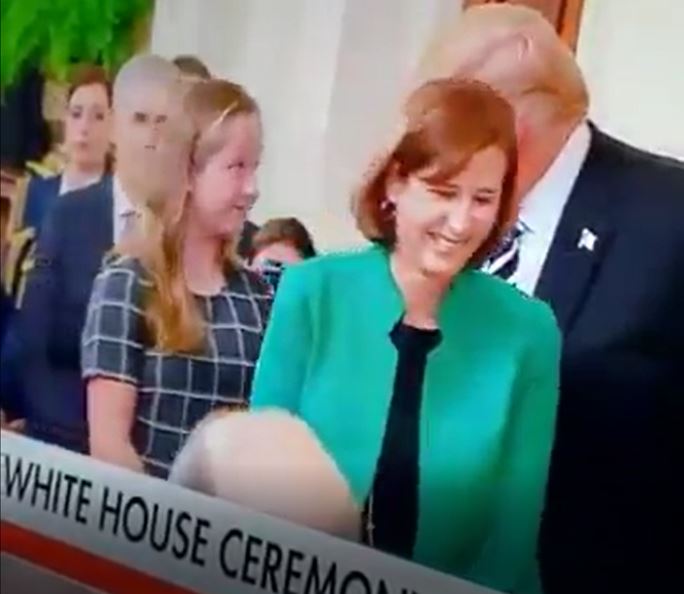 When Brett kept smacking Ashley’s back, coupled with her fearful glances, I couldn’t shake the thought that his body language was saying “Good dog!” If you’ve ever seen a dog terrified of its owner, groveling for affection, whimpering while looking into their owner’s eyes for reassurances that they won’t get kicked in the ribs, you’ll recognize that look.

After seeing the fireworks of Mr. Kavanaugh’s denial of Dr. Ford’s testimony, with her unsurprised expression, I got the feeling she’s seen it all so many times she doesn’t even flinch unless she’s within swinging distance.

I know the other assumptions are unsupported and only a guess, but it felt to me those rough pats on the back and her unease looked like he put a bruise on her a few days ago and kept whacking the tender spot as a reminder of what can happen if she gets out of line.

Ashley Kavanaugh’s body language is frightening and it speaks volumes. It indicates fear/distress/extreme discomfort around her husband, and I also see signs of coercive control. I have only witnessed this type of behaviour in female/male victims of abuse.pic.twitter.com/6TkrRq6EiT

I’ve had an interest in micro-expressions and body language longer than I can remember. I’ve been following the Kavanaugh hearings and accompanying news coverage with an interest in the story that hasn’t been told. I’m glad to know I’m not imagining things as the public reaction (including that of body language expert) has supported my conclusions. I thank the Lord I’ve never been in such a relationship, but I have known of some women who were in abusive relationships with alcoholic men. I’ve seen the “checking in” behavior…so many micro-expressions that show fear.

“…one of the saddest shows of ‘loyalty’ I have ever seen.”
–Body language expert Robin Kermode

If a democratic administration tried to push for the confirmation of a judge at any level that went on such a partisan rant, the GOP would be completely right in calling for their dismissal. They would also be completely justified in calling for an investigation into what the heck went wrong with anyone in power who would continue to push for such an unfit person after such a performance.

The media circus went off on a tangent–the emotional issue of whether or not Mr. Kavanaugh attacked Dr. Ford, and not on more recent issues that could have an effect on his impartiality.

It seems most people have forgotten that almost none of Mr. Kavanaugh’s records were released even before Dr. Ford’s hearing. It would seem that being in a sex/abuse scandal was bad for the political party that was trying to ram his confirmation through, but it was an answer to their prayers. It took attention away from the fact that more than 90% of his records were still unreleased despite the fact that other recent justices were carefully scrutinized and at least 99% of their records! In fact, all records that could be found on other justices during the previous president’s tenure were released. I feel that this sign of bad faith should be the main issue and should have been investigated even before the Dr. Ford issue.

Mysterious finances/Debt paid by whom?

Kavanaugh did some wild spending and ran up debt which was paid off by a person or persons whose identity remains a secret. This shows Kavanaugh has been bought and paid for, and is therefore impartial. This is what I feel is the most disqualifying issue for Kavanaugh.

Before President Donald Trump nominated Brett Kavanaugh to the Supreme Court, he had a lot of debt. In May 2017, he reported owing between $60,004 and $200,000 on three credit cards and a loan against his retirement account. By the time Trump nominated him to the high court in July 2018, those debts had vanished. Overall, his reported income and assets didn’t seem sufficient to pay off all that debt while maintaining his upper-class lifestyle: an expensive house in an exclusive suburban neighborhood, two kids in a $10,500-a-year private school, and a membership in a posh country club reported to charge $92,000 in initiation fees. His financial disclosure forms have raised more questions than they’ve answered, leading to speculation about whether he’s had a private benefactor and what sorts of conflicts that relationship might entail.

The fact that Mr. Kavanaugh might have gambling issues that wouldn’t exactly be classified as “small stakes”, which have led him to incur debt, could affect his impartiality.

An issue so problematic it needs to be its own post is the recent case in which Kavanaugh made use of loopholes and attempted to thwart a young woman in a vulnerable position from receiving health care services for which she had arranged.

Why the confirmation was rushed

The point to ramming the confirmation through was likely to seat him for the Gamble case because he’s Trump’s “Get out of jail free card”.

Some pundits have speculated that the reason why certain politicians seem to be in a rush to seat Judge Brett Kavanaugh on the Supreme Court is that is that he has a notably strong view of presidential powers and therefore would be a vote in favor of Gamble and for an expansion of presidential pardon powers — and the Supreme Court announced they would be hearing this case the day after Justice Kennedy’s retirement. This temporal proximity has prompted some commenters to opine that the rush might be motivated by a desire to limit the president’s legal liability in the Russia probe and other investigations.

Not “promoting confidence in the judiciary”

He seems like someone who is abusive behind closed doors and his partisan rant after Dr. Ford’s testimony is more than enough to disqualify him. He displayed a disgusting lack of maturity and did not live up to the American Bar Association’s Rule 1.2 “Promoting Confidence in the Judiciary”:

A judge shall act at all times in a manner that promotes public confidence in the independence,* integrity,* and impartiality* of the judiciary, and shall avoid impropriety and the appearance of impropriety.

A lot of people say Zina Bash didn’t throw up White Power signs—and maybe she didn’t. The one thing I can say with certainty is that her body language showed she was obviously making a point of making the sign with her hand to signal something to someone.

Her facial expressions and hand gestures were purposeful and strange. 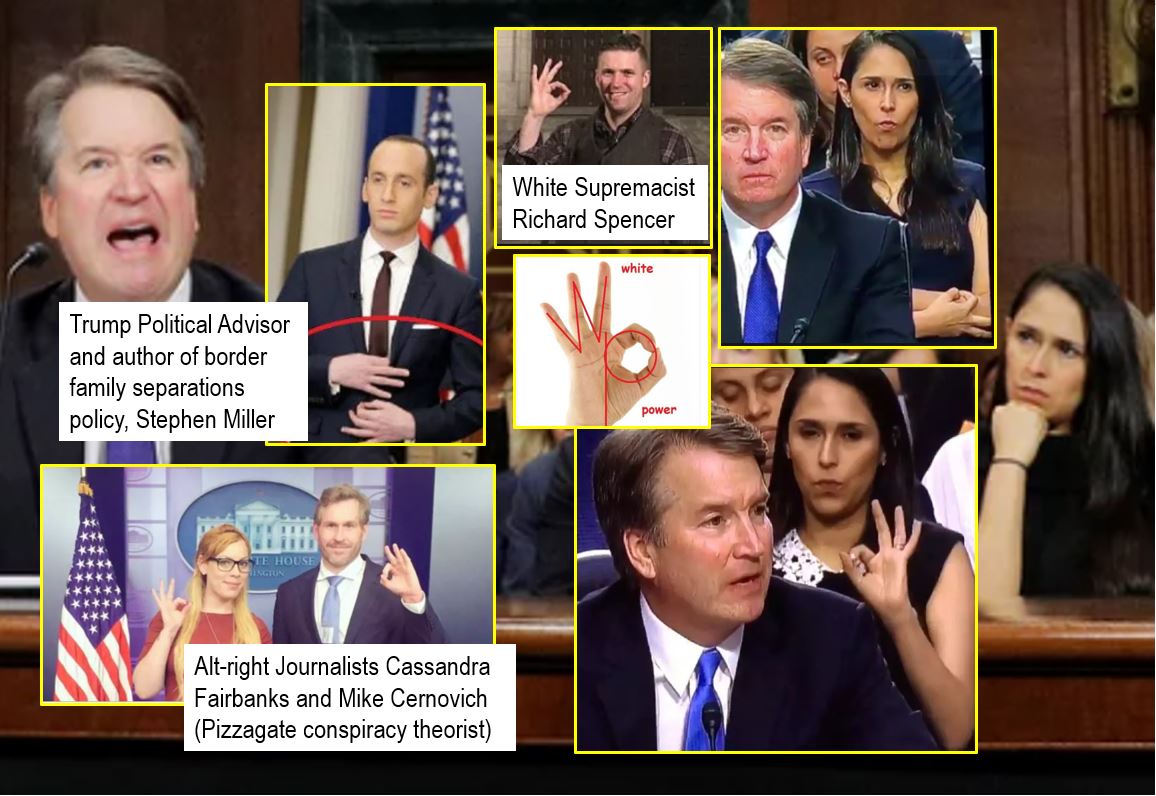 Her hand placement was done after checking her phone—likely after being told she was visible to the cameras. The second day, she put the hand signal by her head. It happens to be the same signal done for the camera as prominent members of alt-right white supremacy groups. It is at best childish and at worst a sign of support and membership of the alt-right. Whatever it is, it’s behavior unbefitting of someone in power. Many have pointed out that Ms. Bash is Puerto Rican, offering this as proof she couldn’t possibly be in the alt-right, which shows a lack of understanding of self-hatred, disavowing of one’s ancestry, and the alt-right.

In short, no matter why she was trolling, it shows the company he keeps is questionable.

Sober as a Judge?

The simile “Sober as a judge” has been in use since 1694—older than the United States of America.

Although I’m not an alcoholic and I’m incredibly fortunate that I haven’t been in a family that struggles with these issues, others have made the point that Kavanagh seems at best to exhibit traits of a “dry drunk”.

According to the American Addiction Center, a dry drunk is someone in the early stages of emerging from alcoholism, who has stopped drinking but has yet to remediate the underlying issues.

“Someone struggling with dry drunk syndrome may still maintain strained relationships with their loved ones. They may still suffer from unhealthy habits, both internally and externally,” they Center writes. “In short, while they may have quit drinking, the individual has yet to deal with the emotional baggage that led them to alcohol in the first place.”

Some of the symptoms of dry drunks includes “resentment,” “anger” and “romanticizing their drinking days.”

Kavanaugh unleashed a tirade to the Senate Judiciary Committee Thursday, both proclaiming his innocence to sexual assault allegations and accusing Democrat senators of orchestrating a plot to destroy his career as revenge for his work investigating Bill Clinton in the 1990s.

It’s not too much to ask for a judge that instills confidence in the institution. In fact, it’s the bare minimum. Going back to the Bar Association’s rule 1.2, keep in mind that there is a reason it’s part of rule #1 and not rule #45647526. It’s pretty darned important. We deserve better than “Beach Week Ralph Club’s Biggest Contributor” Brett “I like beer” Kavanaugh.

I wouldn’t want to hold someone’s past against them if they’ve made great strides to change. But  it doesn’t seem as though he has changed and become more mature with time.

His explosive, immature, defensive testimony and wild claims shows someone who hasn’t become a better person. I see Mark Judge’s buddy “Bart O’Kavanaugh” and a manchild who manhandles his wife and can’t deal with adversity. 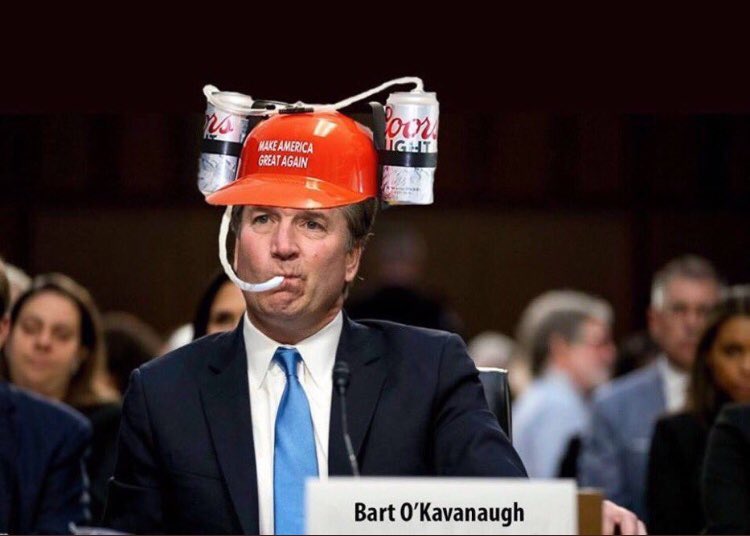 Buckle up. We’re in for a lifetime of this guy.