I was interested in growing as a writer since I do SEO content and similar content. It’s creative, but not in an entertaining way. I started going to a few writer’s groups, and the monthly meetings of one group includes a writing assignment. Since I haven’t done creative writing since one class in High School, I am out of practice. I have developed a skill at starting a story and even coming up with a rather good middle, but coming up with an ending is rather difficult. This is my third writing assignment, and the first to post on my blog. I have decided to post this story as it’s likely to become the first or second chapter in a short book.

The assignment: Think off a city/town with weird name, ask yourself what kind of people live there.

These examples were given as a “jumping off” point for the exercise:

I thought of the time I went to French Lick as a kid—I have a sensitive snout and never really acclimated to the sulfur smell. I was about 12 at the time, and the thought of going on vacation to a city that smelled like farts seemed more appropriate for preteen boys. I asked a few people in town how they got used to the smell, and they just shrugged and said they didn’t notice it anymore. This writing exercise gave me a chance to think back to that town and consider what sort of people could find something to love in a town that smelled so bad to me. Anyone who travels outside of the region would experience fresh air but would still return to the pungent place they called home. I combined my perception of the local’s tenacious nature along with the satanic panic of the 80s with the resurgence of superstition

I also found that the area has a higher than average lithium content to the water, and I decided to include that (although that will come up in a later chapter).

I began this paragraph to set the tone. It’s set in present day or early 2010s, but my look back to the 80s demanded more attention and became its own thing. Here’s the original beginning:

The holy rollers moved into town, in hopes of banishing the devil from Devil Springs, Indiana. The sulfur stench was enough to scare off all but the toughest of Hoosiers, who clung to their jobs at the match factory for dear life. Sulfur match tips kept a steady base of employment for this little town to weather the storm of downsizing, offshoring, and the scourge of Walmarts and big-box stores from destroying the small-town economy.

Fire and Brimstone in Devil Springs

The 1980s brought satanic panic and a traveling minister determined to save Devil Springs from demonic possession and certain ruin. Reports of chants at basketball games of “Go Devils!” had reached 60 Minutes and various news programs, but rarely did it bring more than a small news crew that would vanish by sunrise, the stench hastening their departure. Nobody wanted to see the sights when the smells only varied between gunpowder and rotten eggs.

Despite the heavy stench in the air, Minister William Harold Whiteford had his crew pitched a large tent on the outskirts of town by the state road and a county road leading to Battleton, where the local sulfur supply was turned into gunpowder. This intersection had the busiest stoplight in the county, so the revival tent got a slight reprieve from the heavy cloud of sulfur with intermittent bursts of car exhaust.

“I can SMELL the DEVIL, springing up from the BELLY of this town” shouted the minister, waving his arms at the traffic. His dutiful staff of five grandchildren stood by holding signs, trying not to fly away in the heavy winds sweeping through the valley. When he failed to draw a crowd after a week of shouting and wailing, he resolved to bring his message to the people. High school basketball season had just begun, and he would curtail the demonic chants whether the townsfolk liked it or not.

The minister arrived early, taking a seat in the highest row of the rafters. He sat silently biting his tongue as the chants grew louder. His loyal followers sat in stone-faced solidarity. The game had reached a fevered pitch at the end of the third quarter, and he could no longer contain himself.

“Go Devils! Go Devils!” The crowd shouted in unison, and Minister Whiteford walked solemnly down the aisle of the bleacher, each step purposeful and full of the weight of his torment and fear for the town; his performance was completely ignored. He dabbed the sweat from his forehead with a white handkerchief, clinging tightly to his Bible in the other hand. He strode past the cheerleaders and referee on the sidelines. The team captain was lining up his shot, oblivious to the arrival of the town’s self-proclaimed redeemer.

“Satan, I rebuke thee!” the minister bellowed, in a voice of commanding resonance that normally sent repentant sinners to the altar call without a dry eye in the tent.

The effect was not what the minister intended. The chants to the devils had subsided, but not out of respect; rather, the crowd had turned from pandemonium to pin-drop silence.

The minister’s shouts rang out when Teddy O’Reilly was laying up his shot, and the silence was broken when the ball banged into the backboard, and bounced several times before rolling out of bounds. No one went after it. All eyes were on the minister. It wasn’t the way he was used to getting attention, but after an embarrassing week of fruitless calisthenics in front of apathetic motorists, he was grateful for it.

As he drew breath, preparing his baritone instrument of the Lord for a fiery sermon to shake the rafters, he was interrupted by a scrawny young man with teased hair, a faded denim jacket, and a Motley Crue t-shirt. “What the hell are you doing, old man?”

It was not the minister’s voice that shook the rafters, but laughter.

Panicked, the minister hollered, “Hell! Damnation! Don’t you see? That’s what I’m saving you from! You ungrateful heathens! I’ll save this town from the Devil if it’s the last thing I do!”

The laughter only increased, and he waved his Bible like he was swatting invisible flies. “Don’t you see? The odor of the devil has infected this town! The sulfur of the beast is a poison to your souls!”

The referee now walked over to escort the minister off the court but paused when the minister slowly raised his arms and tilted his head back, eyes closed, and held the pose for several seconds. The crowd was silent again. “The Lord has given me strength…to forgive you.”

The audience howled with laughter, even louder than before. It didn’t matter. He plowed ahead with his message.

“Satan’s stench has bewitched you and hardened your hearts. For generations he has turned your people into his servants.”

The minister pointed to the cluster of headbangers, trying desperately to be heard over the pandemonium, “Judas PRIEST?!?! Mega-DEATH?!?! I can see your pentagrams! You are servants of the Dark Lord!”

“WooHoo!!” The headbangers hooted and whooped, jumping and flailing, with audience approval they could only dream of on “Battle of the Bands”. They made the most of their moment. 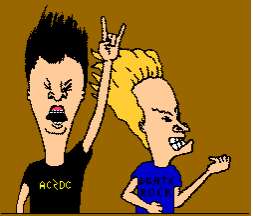 The minister had seen young folks miming the playing of instruments, but never such an exaggerated display. Convinced this was the work of the devil, he continued his tirade, but it was no use. He was drowned out by laughter as the coach and referee each took an arm and walked him out.

When they reached the hallway, he was met by his five grandchildren, and they wordlessly shuffled out of the building. The minister clutched his Bible to his chest—the breastplate of righteousness. This meant war. He would cleave the grip of The Deceiver from the heart of this town. He wasn’t here to win a popularity contest. He was on a mission from God to free these ungrateful heathens from eternal damnation.