This is Extremely Dangerous to a Democracy

Years of teaching to the test and focusing on telling students what to think, not how to think, have created generations of voters who are susceptible to fake news. A recent study has shown fake news had a “significant impact” on influencing voters in the 2016 presidential election. You don’t need to hack the vote—it’s easy enough to hack the voters!

The information age has apparently served to exacerbate this problem; instead of learning how to make use of information, we feel we are better informed partly because we have access to more information. Without an ability to spot the difference between accurate or misleading information, this vulnerability can make new, contrasting information seem confusing. It’s quite common for us to “shut down” or get defensive when presented with unfamiliar points of view. Partisanship can become part of one’s identity.

Add in a search filter bubble and prioritized news feeds on social media, and contrasting information cannot penetrate—instead of a bubble, it’s now a wall.

Confusion when faced with more information than one can process can also be a contributing factor to our increased preference for authoritarianism. Those who desire a “strong man” to rule them have voluntarily handed over their own locus of control.

For example, this chart from The Economist on the rise of populism from 1995-2014, which shows the percentage of respondents that say having a strong leader, who does not have to bother with parliament and elections, is a good way to run their country: 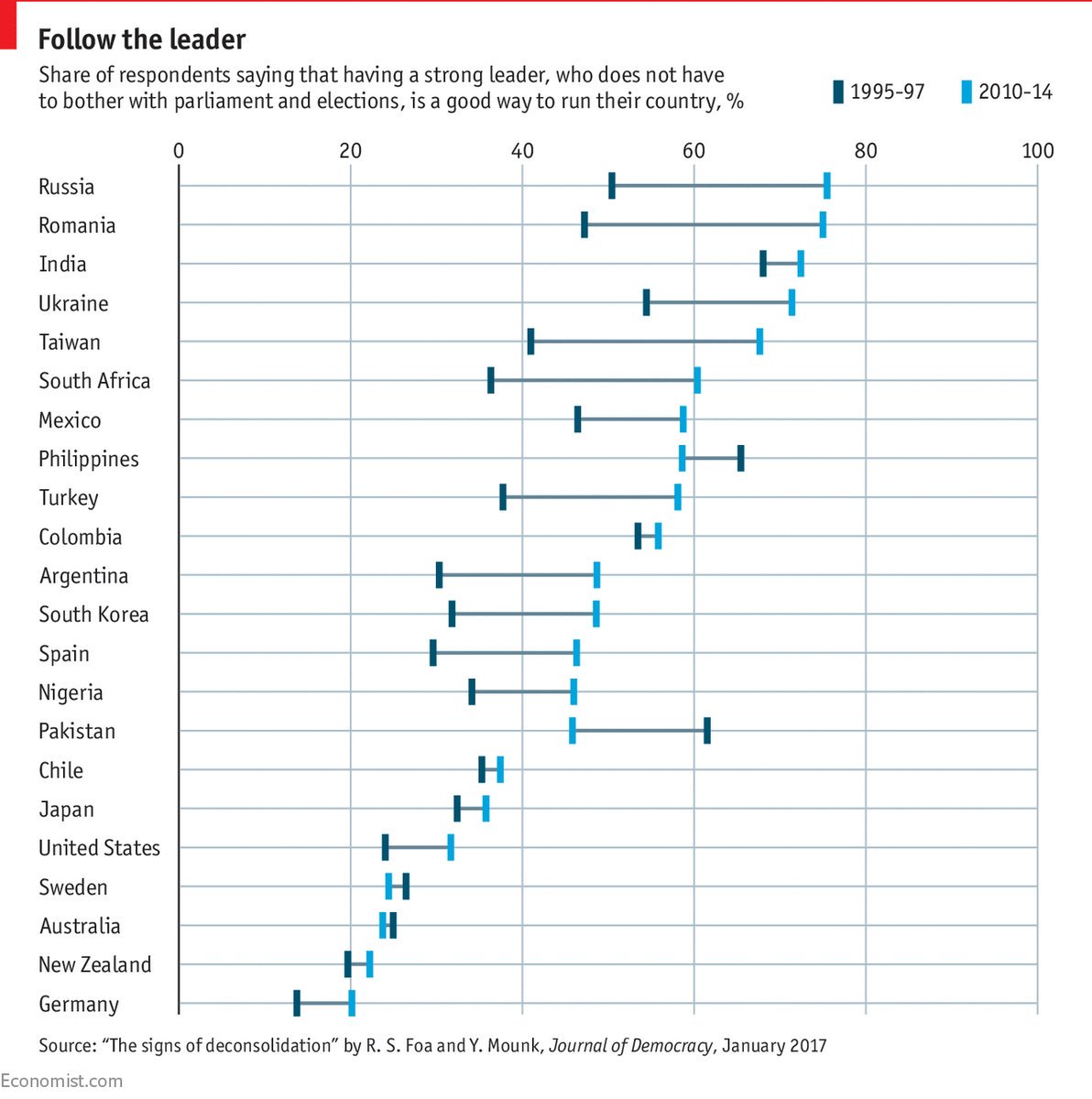 Percentage of respondents that say having a strong leader, who does not have to bother with parliament and elections, is a good way to run their country

Now we have what appears to be state propaganda masquerading as local news. For an in-depth look at just how many social changes, regulations, and policies have taken place for this to appear gradual, I highly recommend watching a recent documentary, “The Brainwashing of My Dad”. The dismantling of the Fairness Doctrine and the passing of the Telecommunications Reform Act helped set the stage for changes that are extremely dangerous to our democracy.

The same jerk who voted to end net neutrality, Ajit Pai, is the same person who is allowing Sinclair Media to turn trusted news sources into an Orwellian propaganda.

Not only was it comforting to know that I’m not alone in hitting the panic button, I was fortunate to see this video by famed journalist Dan Rather, who not only expressed concern about this new development, he has created a simple guide to help you identify fake news to become an informed citizen.

I would encourage anyone to watch the whole video, but I have included a transcript with minute markers of Mr. Rather’s tips to navigate the information overload from our current media.

7:37 And by the way, if you’re really interested in identifying fake news and figuring out what to believe, if you’re truly invested in the work of being a good, informed citizen, may I respectfully offer a short primer…

7:53: Number one: Understand that trusting a news outlet doesn’t mean they’re perfect. No one’s perfect. It means they tell you when they screw up.

8:07: Number three: Don’t rely on just the news to understand an issue. Read books. Find the experts. Find out how issues are discussed outside of news.

8:21 Number four: If you find yourself agreeing with everything your news outlet says, you’re doing it wrong. If your news doesn’t challenge you, challenge your news.

8:51: Number six: Remember that what the news tells you is far less important than what they decide to talk about in the first place. If they focus on personal, speculative, and salacious stories, find a new outlet. One that drills in on issues that actually affect real lives, your wallet or pocketbook, health and education, schools, social justice, the environment.

9:20 The true test of trustworthy journalism isn’t that they never make mistakes, it’s weather they’re willing to challenge the powers that be on behalf of those without power.

I’m glad I looked up more information about Dan Rather because I found he was inspired to education the public as a response to the rise of fake news in the 2016 election. He recently created a new course on Udemy and even though the discount code was labeled as outdated, it still worked from this link: https://www.entrepreneur.com/article/296208

The recent compilation of Sinclair Media’s mandatory talking points is rather disturbing and reminiscent of “We are the Borg. You will be assimilated. Resistance is futile.”

(See this link for original video and article from Deadspin)

Sinclair Media’s formulaic approach of establishing trust and immediately attempting to sow the seeds of suspicion against all other—purposely vague—news sources, is especially troubling.

“But we’re concerned about the troubling trend of irresponsible, one sided news stories plaguing our country. The sharing of biased and false news has become all too common on social media. More alarming, some media outlets publish these same fake stories… stories that just aren’t true, without checking facts first.”

OK let’s break that down:

“But we’re concerned about the troubling trend of irresponsible, one sided news stories plaguing our country…”

“The sharing of biased and false news has become all too common on social media.”

–Vague…look out for the boogeyman!

–Wow—really makes you think about SOME media outlets that publish THE SAME fake information! Do you know anybody who does that?

Don’t worry about checking facts—let us do that for you! How great we’ve found a trusted local news source that will check the facts for us!

–The very best part—after they’ve done their best to low-key scare the living daylights out of you, they put the cherry on top:

“But we are human and sometimes our reporting might fall short. If you believe our coverage is unfair please reach out to us by going to KOMOnews.com and clicking on CONTENT CONCERNS. We value your comments. We will respond back to you.”

–We? Who is we? The local news agency and local anchors will NOT be the ones responding to you. Your concerns will be passed on to the corporate offices of Sinclair—which technically is PART of “WE”.

There really is no honest part of this script.

Aaron Weiss, the Former Sinclair news director explains in this video how Sinclair “co-opts the credibility that local anchors have built up in their communities to promote a political agenda.”

I’m no journalist, just a concerned citizen. And though I’m not used to tooting my own horn, I am a rather good researcher, and I have been paying attention—especially in this last presidential election cycle. The sum total of changes the majority of Americans have accepted is alarming. Divisiveness has in part been stoked by the media, and those who have been entertained by “shock jock” type news sources (like Rush Limbaugh, Sean Hannity, and Laura Ingraham) have happily accepted any news source that makes them feel better about making fun of “bleeding heart liberals” (such as Breitbart) and all the while—not noticing how far things have gone off center. The Overton Window has now shifted to allow white supremacy and a disastrous tax bill among other things that would never have slipped by.

The price of freedom is eternal vigilance. But there aren’t enough citizens paying attention; we’ve reached a critical mass of voters who have been sleepwalking through (and even cheering) unacceptable normalizing of hate speech, unarmed by an inability and unwillingness to think. Now that trusted local news sources will take advantage of that trust to manipulate the minds (and votes) of consumers who will be spoon-fed their pablum and fear-mongering, we will continue further down this slippery slope.

How bad does it have to become? And will we even notice when it becomes “too late”?

This is extremely dangerous to a democracy.