After listening to Greg Sestero’s “The Disaster Artist” and in anticipation of the film of the same name, I decided to rewatch the “The Room”. A funny thing about the audiobook–near the end, (last disc of the audiobook)—at the screening of the film, Sestero’s friend turned to him and said, “This is going to be on your IMDB for the rest of your life.” Knowing how Sestero wanted a beard in the hopes that that no one would recognize him this when hiring him for future work, and how cringe-worthy that moment of realization must have been—makes watching this film even better.

In the video in this link from Vox, “Why People Keep Watching the Worst Movie Ever Made”, they mentioned some of the same things I noticed: “The Room never really lines up with how actual humans behave.” This is why I wrote a separate post on why Tommy Wiseau is either a vampire or an alien, relying heavily on (his co-star Mark) Greg Sestero’s book, “The Disaster Artist”. No, I don’t think Tommy isn’t human. But his perspective seems to be informed by cultural differences and some type of non-neurotypical behavior.

Just like Troll 2, when someone writes a film in English and English isn’t their first language, and there are different customs or different norms to behaving in situations, it feels like an alien made it. The results are entrancing—activating our problem-solving skills as we wonder, how did this get made?

I think another big reason The Room is so captivating is because it’s done in earnest. In “The Disaster Artist”, Greg Sestero explains that one of the first things Tommy revealed to him was that he wanted to have his own planet. Tommy had promotional pens for “Street Fashions USA” with a little world on the end of the pen, labeled “Tommy’s World”. The Room is Tommy’s world. And for a little over an hour and a half, you’re in Tommy’s “Room”, his own little world.

Without going into how weird some of the following things are at every point in the movie: 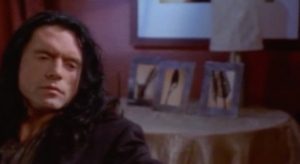 Here some of the highlights of the extremely odd moments.

17:20 Another love scene—this time on an uncomfortable staircase. 19:27—love scene finally over. I am bothered by the fact Mark says: “Why did you do to me?” All this about how Johnny is Mark’s friend—and it’s like Mark has no ability to control himself—somehow it’s her fault he’s participating in the affair.

20:27 The flower shop—“Oh, hi Johnny, I didn’t know it was you.” In Tommy’s world, Tommy looks so perfectly normal that someone wouldn’t instantly know it was him if they saw him from the corner of their eye. “Hi, doggie.”

21:14 We really needed to see her order a pizza, for some reason…? Couldn’t just show her ending the order. That whole pizza order didn’t just end up on the cutting room floor. They couldn’t just eliminate the ordering part and have her mention later that she ordered a pizza already. There are many such oddities in this film—the kind of thing that can drive you bonkers if you love solving riddles and you’re accustomed to the pacing in normal movies.

21:38 Another horrifyingly inappropriate Denny moment: “You look beautiful today—can I kiss you?” What a CREEP!

23:36 Lisa basically forces Johnny to drink—“If you love me, you’ll drink this.” OK here’s my moment to get on my soapbox to state that coercion and threats are part of the “Power and Control” wheel used to identify toxic relationships. “If you love me, you will ___________.” Although not a violent action, it’s usually used in place of violence to get one’s way.

25:45 ANOTHER love scene. If they were so drunk, why did they bother with the candles? This one was mercifully shorter, ending at 26:58.

29:48 The “Chocolate—BJ scene”…In Tommy’s world, it’s not unusual for people to come over and fool around in your house.

31:39 In this scene, Claudette, the “I have cancer” mother, again proves she is the only person in this movie who is aware of manners and how things on planet Earth work.

37:10 Still talks to Lisa, even though he says he didn’t want to have her talk to him like that—as if he’s somehow powerless about the whole situation, when he could have just hung up. In the next scene, he talks to Johnny. “Sometimes they’re too smart, sometimes they’re flat-out stupid; other times they’re just evil.

42:42 Lisa starts the rumor that Johnny hit her.

45:02 One of the best close-ups of the infamous spoons. 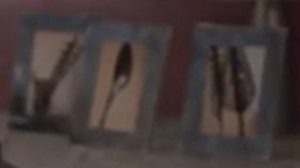 49:02 One of the only outfits Lisa wore that was flattering, and another scene with the mother…going right into the scene with Johnny setting up the tape recorder (from 50:24 to 51:08). Maybe he was a fan of MacGuyver and wanted to make a scene like a MacGuyver episode by spending time showing how he set up his device? Or—it’s so that he can show other men how to catch their sneaky girlfriends weaving their tangled web of lies?

51:40 Scene with Johnny and Peter, the psychologist friend

57:01 Of all the scene blockings, this seemed oddest to me. Leaving the door open, Denny squats on the ground behind a chair, Lisa squats to get to eye level, they talk for about half a minute, then Denny stands up to leave.

59:14 Mark tries to throw, or at least threatens to throw Peter off the roof. A mere 13 seconds later, the apology at 59:27, and then at 59:31 (a total of 17 seconds), all is forgiven. It has to be the record for on-screen attempted murder and forgiveness.

1:01:18 The ill-fitting tuxes and the reveal of Mark’s clean-shaven face. I know Greg Sestero had hoped he could hide his face, but Tommy Wiseau really wanted him to do this as a big reveal moment…for reasons?

1:02:20 More establishing shots, and watching other people make full orders at a coffeeshop was somehow necessary?

1:08:04 Football in the park, then at 1:09:00 Mark is back to betraying his friend. The poor dear. He has no control over his actions. He showed up, knowing Lisa would be there alone.

11:23 “If he can’t give me what I want, somebody else will.” and 1:11:34 “You could learn something from me; you have to take as much as you can. You have to live, live, live.” (Ending with a sassy head wiggle.) Again, I must state—never have I ever known or even known of a woman like this.

1:17:02 The way Johnny acts seems so much more human and casual—in contrast to everything else in the movie—within these few seconds at the party scene. I’ve never seen Tommy Wiseau in an interview being so much like a natural human being. What if—everything else he does is acting like Tommy Wiseau, and he was actually having a drink in this scene, and it got him to loosen up for a moment, and he just permitted himself to approach normal.

1:19:50 Who is this guy? The psychologist friend Peter (who was almost thrown off a roof) had other commitments (because filming went way over the normal time frame), and this other guy Steve storms in and gets upset—How could you two lie to Johnny, etc…then Mark has to deliver the “Keep your stupid comments in your pocket!” line.

1:24:23 Lisa straightens up the spoon pictures after the scuffle with Johnny and Mark.

1:25:06 Another scuffle between Johnny and Mark—thankfully, no spoon pictures were hurt.

1:30:48 The “Why, Lisa, WHY?!?!” tantrum, in which he lackadaisically knocks stuff around and throws a TV, breaks a mirror. It almost seems he’s sleepwalking as he’s bumbling around in this “Streetcar Named Desire” moment. 1:30:50 Mark blames Lisa for Johnny’s death—although he shares an equal part in traumatizing Johnny, and the only person who killed Johnny was  himself…unless I missed the fact that Johnny was the one who actually pulled the trigger.

Also see: Cinema Sins, Everything Wrong with The Room in 8 Minutes or Less