Blowing off steam, venting, and needing a “release” of pressure—common phrases that have remained in use although most of us have far less exposure to steam power than in the days of yore. Those expressions still have meaning but have lost their sting.

Nowadays, the word “Steam” will probably bring to mind a digital distribution platform before thoughts of outdated conveyance. Science teachers, engineers and those working in the energy industry could tell you about the immense pressure—citing psi (pounds per square inch), and the destructive power of mismanaged steam pressure.

Any brave soul who has used a pressure cooker and handled the aftermath of an explosion has a very personal relationship to steam. For them, hearing a warning not to blow their lid if they’re a bit hot under the collar might bring up a flashback or two of the havoc it can wreak on a kitchen—and remind them of their deep respect for the power of steam.

Before I experienced firsthand the raw power of steam right outside the blast zone of a pressure cooker, I’d have thought of one of the first two examples for the word “steam”. But now, the terrifying image of highly pressurized contents instantly engulfing my kitchen will be my go-to mental image for steam.

I knew very well just how dangerous a pressure cooker could be. I did my research. I remembered my Science classes. I knew what kind of force was involved. Knowing that one of the top explosions from Mythbusters was a water heater did not deter me. 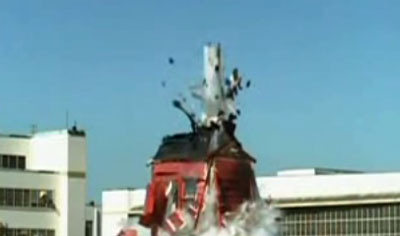 So despite all the warnings, I purchased a very well-reviewed pressure cooker.

For a few years, I used the pressure cooker without incident, enjoying the most fantastic pot roasts, creating thick, rich, savory broths infused with spices with unmatched quality. No-soak beans and other “impossible” feats are performed effortlessly with a well-managed pressure cooker.

The key here is “well-managed”.

A watched pot never boils, but an ignored pressure cooker is sure to cause a mess.

Leaving the kitchen, going to the bathroom, checking a few emails, and letting the pressure cooker “do its thing” is ill-advised.

Sounds oddly specific, doesn’t it? You probably guessed—that’s exactly what I did. “Set it and forget it” might work for some kitchen appliances, but NOT a pressure cooker!

Pretty dumb, but it could have been dumber. If you’re going to be totally boneheaded about leaving the pressure cooker going, it’s best to be out of the kitchen. How’s that old saying go? If you can’t handle the explosion, stay out of the kitchen. Yeah, that sounds about right.

I got cocky for two reasons: First, I had been through several incidents in which the pressure cooker was going at rather high pressure for a while and it responded well to reduced heat. Secondly, everything I made in the pressure cooker exceeded expectations. There was really no downside. I used it frequently—at least once every two months. It was in frequent rotation; never in danger of going to the “appliance graveyard”.

Of course, with such frequent use, it’s probably a good idea to replace the seals. I had replaced the safety plug when it shot off before. I found it, but I felt it was best to get a new one.

In the model I use, the 8-Quart Presto 01370, there’s a ½ inch hole in the top of the lid which is sealed by a little black rubbery plug called the “Quick Pressure release system”. The Quick Pressure release system is a really fun way to have a teeny-tiny, difficult-to-replace item that renders an 8 ½ pound stainless steel device completely unusable if you can’t find it after it shoots off like Wile E. Coyote blasting himself from another failed Acme device. Since it’s black, that makes it easier to hide in the shadows, making it a greater challenge to find it before your pet does. The Quick Pressure release system also gives you all the benefits of an explosion without all that pesky shrapnel or the danger of a heavy steel lid knocking a hole in—if you’re lucky—just the wall or cabinets. 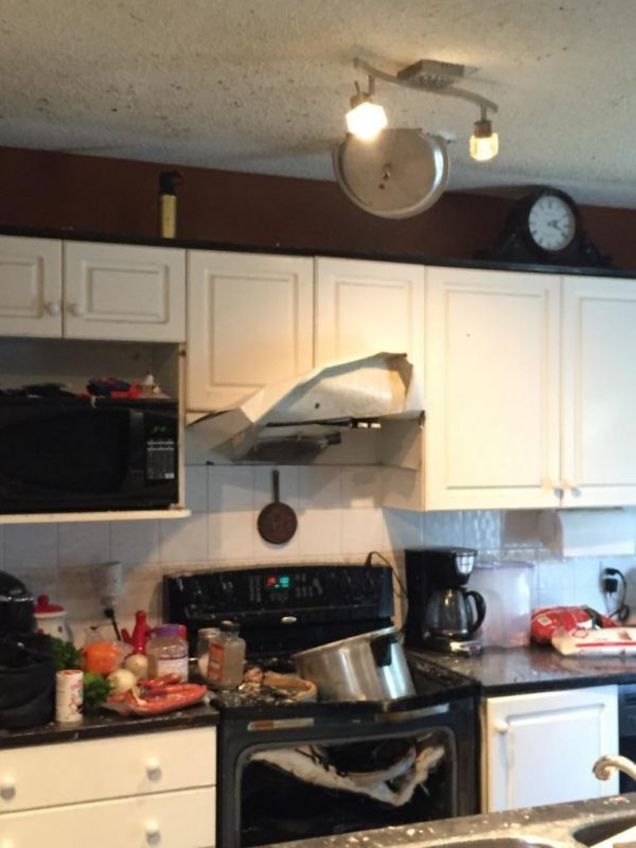 This is not my kitchen, but I think that the “Quick Release pressure system” could have made this nothing more than a nuisance—a mess that could be cleaned in a few hours instead of the expense of replacing a few ruined appliances.

Replacing the plug after an explosion or after a lot of use is a good idea—and if you’re going to replace the plug, you might as well replace the silicon ring that seals the pot to the lid. It’s a good idea; even better if you follow through with it. I didn’t. Going online and looking up the make and model for replacement parts is usually pretty easy, but for some reason, Amazon, Ace Hardware, and many other sites didn’t properly index part compatibility. Nevertheless, I really should have worked a bit harder to find my part. The pain in the rear of finding a replacement part pales in comparison to the inconvenience of scraping biohazardous waste from the kitchen cabinets.

I should have known just how much trouble I was causing for myself when I noticed a little steam leaking out from the side of the pot. I thought I wasn’t seeing it right—surely the steam isn’t coming from the sealed lid…

I have since concluded the steam was indeed coming from a lid that was NOT properly sealed.

For this second explosion, I was in the kitchen, washing dishes just a few feet away. I had turned the heat down earlier when I checked on the pressure cooker and noticed there might have been steam coming from the wrong place. This was so unusual I really thought I wasn’t seeing it right. But after the pressure dropped too low, I had to turn it up a wee bit. This second time it got back up to pressure, I realized I really was seeing steam coming from the side of the pot instead of the steam release valve on the lid. I turned the heat off, figuring I’d deal with it once the pressure dropped.

You’d think moving the pressure cooker off the burner would be a better idea, but it has been my experience that moving a pressure cooker at high pressure can cause it to release more steam. Slight movement or vibrations are like kicking a hornet’s nest. Having both hands on the handles of a pressure cooker gets my face a bit too close to the Quick Pressure release system while it’s doing what it does best.

I had just turned off the heat and turned my attention back to the sink, and just a few seconds later, it seems the slight vibrations or the pressure just got to the right point to seal up around the rim of the pot. Instead of having the steam escaping from the side, it now had nowhere else to go. The Quick Pressure release system showed me exactly why its name begins with “Quick”. All those kids using baking soda and vinegar to make a volcano for the Science Fair just need a poorly-attended pressure cooker with a Quick Pressure release system. They’d take first prize. Bonus points for finding the little black plug.

I’m very lucky I was about 5 feet away from “ground zero”. The “blast zone” was a radius of 3 to 3 ½ feet, and within fewer than 5 seconds, about 3 quarts of liquid and liquified pig went spewing into the oven hood, BEHIND the oven, overflowing the drip pans, and everywhere imaginable from the ½ inch hole in the lid.

I had already cut off the usable parts of the ham, and the contents of the pressure cooker were what most might consider “scraps”. Reducing waste is an important part of my cooking technique and you just can’t buy the kind of broth you can make in a pressure cooker. I had plans to turn it into a magnificent pot of ham and bean soup. When I make a batch of this soup, I throw away nothing away but the plastic wrap and the spent skin, fat, bone, and gristle after having extracted as much of the protein as I can. But the high amount of protein and fat that make a fantastic broth can make a devil of a mess. It congealed almost instantly to every surface. I’d normally scrape the layer of fat off the broth once it solidified in the refrigerator, but this slippery fat was infused as a frothy mix; an emulsification that found itself into far-flung reaches of each nook and cranny. Instead of skimming, I was scraping the fat off my cabinets.

I don’t believe in ghosts, but for several hours, I was haunted by the remnants of vaporized pig that hung heavily in the air as I tried desperately to exorcise it. “The power of Clorox Kitchen Spray compels you…” The irony that this occurred on April 1st was not lost on me. That pig might not have had a very exciting life, but it got a chance to pull one unforgettable prank.

The explosion made quite a racket, but I admit I let out a sound from the depths of my soul that rivaled that of any horror film “scream queen”. My husband was rolling the trash cans to the end of the driveway when he heard the terrifying sounds coming from the house. He came running in just as I had stopped to catch my breath. Later he told me he the sound was so horrifying, he was sure the pressure cooker had melted my face off until he saw me.

I was still rattled hours later as I was scrubbing down surfaces I hadn’t even thought of. Thankfully, I had my husband’s help in rolling the oven away from the wall. I hate to say it was necessary, but I’m glad I had the help. He helped and kept handing me paper towels, cleaning supplies, and whatever else I needed as I plowed my way through the kitchen. Four hours later, you could’ve knocked me over with a feather.

Opening my eyes the next morning, I feared walking into the kitchen to smell whatever might be lingering from the carnage the day before. But it appeared that neither the cleaning supplies, nor porcine scent were wafting through the air. Just a clean kitchen.

I even found that little black plug. 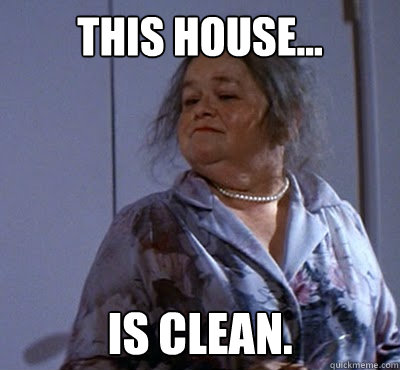 All she had to do was get rid of a poltergeist.

This wasn’t the way I wanted to do spring cleaning—wiping down my whole kitchen while my nerves were rattled. But it appears to have worked.

I’m still not sure, though. I had the pot filled up to the top fill line, and it looked like at least 3 quarts of fluid and liquified pig were no longer in the pot. I did an awful lot of cleaning, but I’ll always wonder if I got it all.

One thing’s for sure, I have a newfound respect for the immense power of steam.