Raised by the Great Depression

I wasn’t raised during The Great Depression, but survival skills of the Great Depression raised me. My grandparents were young farmers during that time, and my mother, the last of 3 sisters, wasn’t born until the Baby Boom years. By that time, her family’s frugal practices were already deeply ingrained.

As Midwestern farmers, thriftiness was already a necessity, but the lean years made such penny-pinching mandatory. As the youngest of three sisters, she was taught by her mother and sisters all the traditional “woman’s work,” farm work, and how to put the death grip on a dollar. 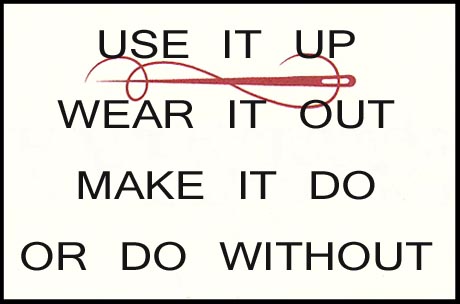 Along with frugality, my mother taught me that no matter how well things are going, a quick reversal of fortune can happen at any time. With her at the helm of our family’s finances, she got us through my father’s midlife crisis of wild spending sprees. Although I was a sassy and willful child at the time, I finally learned to respect her point of view and practices when misfortune struck our town as I saw history repeating itself with scenes like the tales my grandparents told me of the Great Depression.

It wasn’t exactly The Grapes of Wrath, but peeking through the backseat window, I saw the long lines wrapped around the Unemployment Office when our town’s factory laid off half of the workforce. If shot in black and white, these dreary smokers shielding themselves from the cold during their long wait, their heads hung low, would look virtually indistinguishable from old film reels of soup kitchens and Hoovervilles.

Art imitates life, but I knew that somehow, my life didn’t imitate the lives of anyone else I knew.

I wouldn’t have known how unusual my Mother’s practices were until my exposure to “normal” people put her ways into stark contrast. I don’t know which came first—the aluminum foil incident or the Taco Bell incident, but these and other choice moments of my life made it quite clear that I was from an alternate universe or at least another time.

While spending the night at a friend’s house, I watched with horror as my friend’s mother throw away a large piece of aluminum foil. I don’t remember if the words actually escaped my lips as I thought, “You’re just gonna…throw…that…away?!?!”  I thought if I could surreptitiously stick it into my pocket, I would proudly present it to my mother. She would clean it off, dry it, and fold it in her own gentle and patient way. Then the foil would take its rightful place in the bottom drawer with a few dozen other pieces she painstakingly restored with the care usually reserved for a Rembrandt.

I knew better than to dive into the trash can after the foil, knowing it’s better to observe this behavior and reflect on it later in much the same way a war reporter would go against their instincts and refrain from intervening. 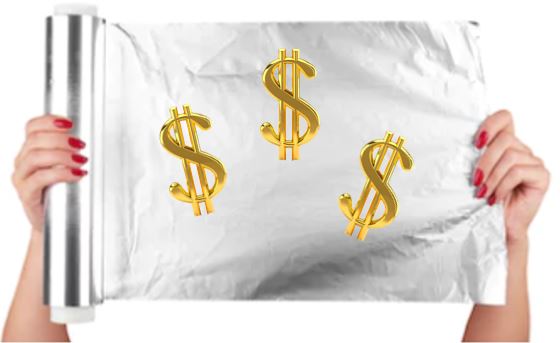 After a softball game, I got a ride home with one of the team’s families. They bought me a taco from Taco Bell. I’d never been to Taco Bell; it was one of the few brushes I’d had with hot sauce, and the excitement of being able to repeat this experience was intoxicating.

The frequency in which my family went to restaurants could easily be categorized as once in a Blue Moon. Fast food was generally purchased out of guilt—during long road trips as a sort of exchange for using the restroom. This really stuck with me. I still feel that buying fast food somehow implies that I’m far from home. More specifically, I’m far from my kitchen—that’s where food is made—by mothers and daughters, not by strangers.

When I came home, I told my mother how cheap the food was, thinking that by highlighting the low cost, she would consider it—but I was immediately shot down with the claim that Taco Bell is too expensive. (This kind of felt like “You’ll shoot your eye out.”) She explained that the cost of the ingredients at the grocery store is far cheaper per serving than the cost of a meal at Taco Bell.

To her credit, she was right then, and she’s right now (especially when you factor in quality). But at the time, I thought this was just my mother being weird.

This practice of factoring down costs per serving, unit, and use is pretty boring for a kid, but she did this enough times that it finally stuck.

For days, the thought of being different gnawed at me. Being different is fine when you’re an adult, but it’s unthinkable when you’re in grade school. Finally, my curiosity got the best of me as I decided, “Who would know more about normal people than a normal person?” I decided to ask a friend at school if Taco Bell is expensive. Yes, I know my mother gave me a more than satisfactory explanation, but at the time, it went in one ear and out the other. I explained what my mother said, and the response was a blank stare that seemed to last far too long, then she said something like:

“But, isn’t your dad a professor, and your mom is a teacher? I mean, your family has money, right?”

I explained that we live in a nice house, with nice furniture, and certainly didn’t live like paupers, but somehow, the price of a taco is out of reach. Laughter came from the other girls. They thankfully forgot the matter by the time the recess bell rang.

Not only were there moments that showed me that I was a little bit different but there were also lingering clues of my mother’s thrifty ways. The homemade clothes were, for the most part, tolerable. The homemade jeans with an elastic waistband, however…that’s a different story. By the time I got to Junior High, my mother finally had grown tired of making my clothes even though I begrudgingly helped. Yes, I admit I was a whiny kid.

Unfortunately, history has continued to repeat itself. During the recession of 2007-2008, I experienced a reversal of fortune firsthand—when my entire department got the ax. In 2021, I still managed to avoid the virus, but COVID pulled the rug right out from under me. Thanks to my Great Depression training, I’ve been able to survive.

If you lived with a roommate as unstable as this economic system, you would’ve moved out or demanded that your roommate get professional help.
—Professor Richard D. Wolff

My survival skills have worked so far, so I don’t see any reason to change. So if you poke around my DIY section or product reviews, you’ll probably notice I don’t tend to splurge. If you’re looking for the aspirational and unattainable glam of an influencer or a Pinterest-y site with scrapbooking projects and 1,001 things to do with Mason jars, this site is sure to disappoint. But if you’re a penny-pincher who enjoys a few too many Star Trek references, you’ve come to the right place.